Jump to my first post to learn more about this project and why I as a Vegan have taken a particular interest.

Kevin & Francis were slaughtered on Thursday.  I am glad to have had the opportunity to spend time with them and learn first hand what I have read so many times ie. that pigs are beautiful, intelligent, playful creatures with unique and wonderful personalities.

The past 3 months have been an interesting journey for me.  I’ve had some great discussions with Aarod and am glad to have gotten to know him better.  I have felt quite conflicted at times because I am ethically opposed to eating animals but recognize that if people are going to eat meat, this method offers animals a much higher welfare standard.  I also feel that Aarod’s project has allowed many people to connect with an animal that they would not normally encounter.  Hopefully these people have gained an appreciation for pigs and will consider the impact that their food choices have.

Most fascinating has been the varied reactions to the project.  I know of several people that have said they couldn’t eat Kevin & Francis because they were too cute, despite the fact that they consume pork from the supermarket.  More confusing still, other meat eaters have actually been opposed to the project.  I can understand why Vegans might not appreciate it but if you eat meat, I believe you should be supporting free range, locally grown, organically fed animals.  Considering that we live in an EcoVillage, I was surprised to hear that Aarod only received 17 orders for pork.  Either there are a lot of people in the village that don’t eat pork or they just have trouble doing it when there is a name and face attached to it.

Finally, I must offer an explanation for the cartoon below.  I wrote this about 2 months ago when I was anticipating the likely outcome for Kevin & Francis.  I hope that this blog and Bacon Bros. have generated discussion and deep thought about what it means to kill an animal.  I know that Aarod cared for Kevin & Francis, so the below cartoon is perhaps not entirely fair.  Ultimately though, eating animals is a choice, so if you think the cartoon is provocative, consider how Kevin & Francis would feel.

Kevin & Francis will be slaughtered tomorrow morning.  Read more on Aarod's blog.
Posted by Beau at 20:09 No comments:

I visited Kevin & Francis for what I expect to be the last time.  It's very enjoyable just being in their presence - when they're not trying to bite you.  I'll be sure to think of them each time I visit the farm.  From the look of this picture you might think that I'm leading the pigs in a choir.  Their happy grunts and snorts will be missed. 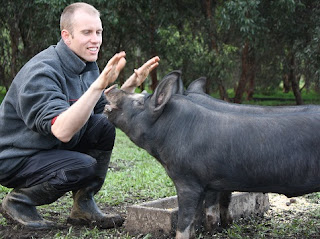 Make you think, make you laugh

Life has been a little busy in the past few weeks, hence no blogs and now the big catch up.  I visited Kevin & Francis today for the first time in about a fortnight and they have grown a lot.  Apparently they are still considerably smaller than average though.  When I arrived, they were huddled up together in their shed having a sleep in.  Once I got close enough, they quickly hopped up and came outside to greet me...or look for food.

Here is a link to some recent research on red meat intake (BTW, pork is classified as red meat).
“Red and processed meat intake is convincingly associated with colorectal cancer (CRC) incidence, but its impact on prognosis after CRC diagnosis is unknown”.
Well not anymore it seems...
“This study suggests that greater red and processed meat intake before diagnosis is associated with higher risk of death among patients with nonmetastatic CRC.”
So basically, red meat causes cancer and the amount you eat determines the likelihood of it killing you.

And in case that’s all a bit doom and gloom for you, here is something to hopefully make you smile...although it really shouldn’t.

If you find Bacon Bros. comics a little confronting, well...success!! They should be.  I'm not aiming to offend but I want to generate thought and discussion.  Here is a great TED talk on the Anatomy a New Yorker cartoon.  I'm not sure where Bacon Bros. fits in.
I should clarify that the chosen method of slaughter for Kevin & Francis is not to cut their throats.  They will be receiving a bullet to the brain, which will hopefully be very quick and painless.  I certainly hope though that they will instead get to live out their days at Freedom Hill. 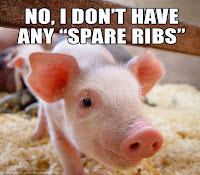 Something for the meat-eating environmentalists

Check out this website for a great infographic that demonstrates the environmental impact of dietary choices.  It's a little American focused but the numbers still provide an indication of the comparative difference. 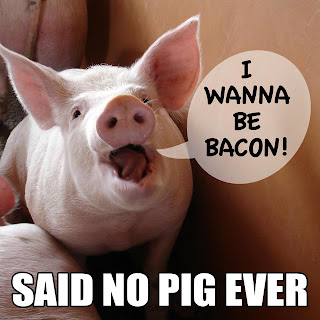 I came across a fantastic website (filmsforaction.org) where you can view hundreds of documentaries for free.  There are more than 80 listed under Animal Rights, including one called Pig Business.  Haven't watched it yet but the content seems relevant.  Check it out here.
Posted by Beau at 11:03 No comments:

The things we do to satisfy our taste buds 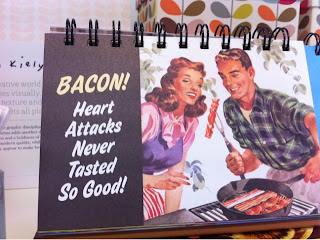 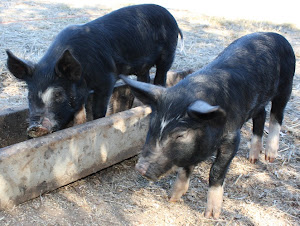